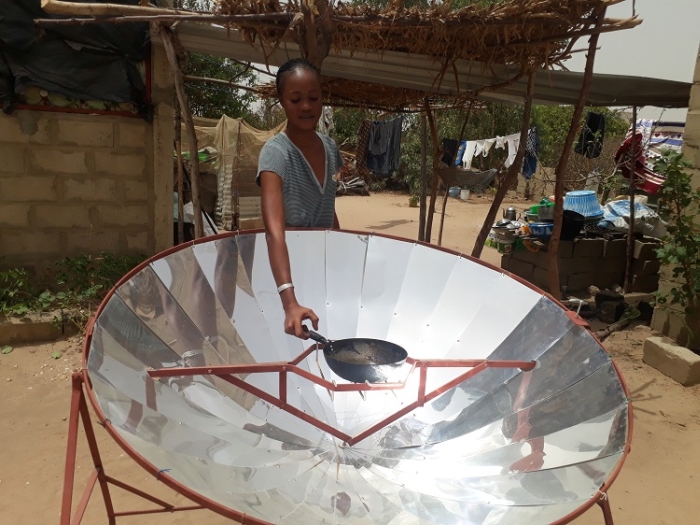 Due to the positive test results in 4 refugee families, the UNHCR has approved the funds for the solar cooker project. 100 on-site built solar cookers will be distributed to selected families in the refugee camp and tested for half a year. The partner organization Redeso (http://www.redeso.org) will be responsible for project support.

Packed in 5 boxes, we sent 220 sets of reflector sheets, a used roll bending machine and small parts for the construction of SK14 solar cookers with air freight to Entebbe. Each of the boxes weighs approximately 170 kg. It takes four men to handle a box.
All material arrived safely at the BSPW in Jinja.
Soon another 100 solar cookers – the racks are already completed – will be sent by truck on the long way to the Palorinya camp.

At the 23rd International Solar Cooker Conference in Altötting, Walter Danner gave an engaging lecture entitled “From solar cooker to solar carbonizer – briquettes and biochar from water hyacinths on Lake Tana/Ethiopia”. Since then, a team of experts, who took part in the conference, has been in constant contact to help realize Walter’s visions. Carbonizing dried plants with solar cookers works, but it takes a lot of time and the amount of biochar is low.

So-called barrel carbonizers were gradually optimized in a large number of tests. Result: the C2C-Kiln. It consists of only 3 parts that are easy to manufacture on site and is highly efficient.

Our member Klaus Strasser (former “weltwärts” – volunteer from EG Solar in Namibia, 2009) is currently working for UNHCR in Nyarugusu / Kigoma Region / Tanzania, a refugee camp that has existed since 1996 and has taken in slightly more than 153,000 refugees from DR Congo and Burundi . His task is to develop a sustainable energy concept for the UNHCR in order to replace diesel generators. The second politically very important topic is cooking energy.
Firewood is 99% the energy source for cooking. This results in deforestation of around 6900 ha per year in Tanzania. This in turn results in an enormous budget for planting trees. In addition to the ecological and financial difficulties, gender and security problems are extreme.

EG Solar has now sent 4 SK14 solar cookers by post via Dar es Salaam to Nyarugusu, 800 km away, as a sample cooker. Tax-free import has been successfully achieved through UNHCR. Klaus is about to introduce solar cooking there and test the SK14 in a pilot project.

Hans Michlbauer took the opportunity to present our development aid concept with solar cookers, wood-saving stoves and solar lamps. He focused on the importance of training in our partner workshops. Escape causes can be combated only if young people have an economic life prospect and an intact environment on site.

He referred to the many opportunities for solar cooking in refugee camps. EG Solar has been able to gather positive experiences in 7 refugee camps for Bhutanese refugees in Nepal. More than 100,000 refugees used some 7,000 solar cookers built in the refugee camps with our support.

He referred to the many opportunities for solar cooking in refugee camps. EG Solar has been able to gather positive experiences in 7 refugee camps for Bhutanese refugees in Nepal. More than 100,000 refugees used some 7,000 solar cookers built in the refugee camps with our support.

EG-Solar e.V. would like to provide “help for self-help” in other refugee camps, too. What is missing are partners in the many camps and financial resources. For construction, implementation and support of the 7000 solar cookers in Nepal approx. € 1.5 million were spent.

On request, we offer special construction courses for refugees. These courses are subject to special agreements, schedule appointments to be made in consultation with the EG Solar office.

In the vocational schools, pupils started a project in which they taught unaccompanied minor refugees in the basics of electrical engineering. Together they built solar lamps.